I was bouldering with some friends at Planet Granite in Sunnyvale, CA. It was a holiday so it was pretty busy, but we found a little bit of wall for ourselves and got to working on a problem together. While grappling with this wall, a man that I would guess to be in his fifties came over to do the same. 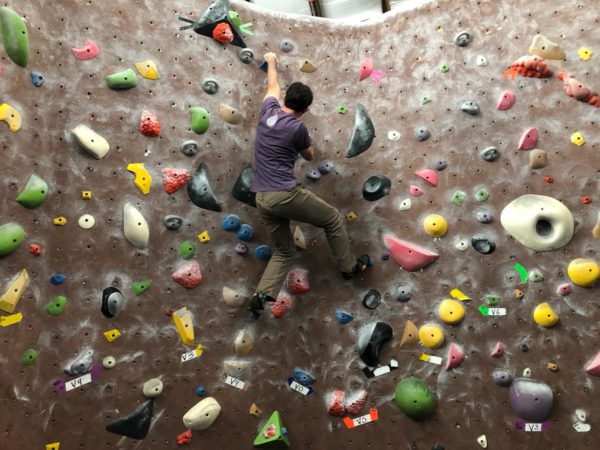 He had a smooth air about him, greying hair in a ponytail, black framed glasses, and from the looks of his arms not an ounce of fat on him. Along with his calm demeanor came a polite confidence that screamed he was all about the climb and well beyond trying to prove anything to anyone. My friends and I were immediately taken with him and keen to see what he’d do first.

When it was his turn, he jumped on the wall and tackled a problem that I would only dream of attempting. It was pretty incredible to watch. We learned a lot simply by observing how he worked those high-end problems.

He was calm, precise, smooth, controlled, and fell from every climb he attempted. Yep, he fell, every single time.

I think that was what impressed us the most. Not the fact that he was attempting those high-end problems, but the way he was doing it. He approached the wall calmly and completely immersed himself in the climb. You could see that he was challenging himself just out of reach (sometimes literally) of what he could do yet he was in control of his body and flowing with the route the entire time except for the last second when he needed to bail. He would attempt a problem, fall, step away from the wall and ponder what he just did. While he was contemplating his moves, we were grunting and struggling up the wall 3 times each to his 1 attempt.

In between climbs we chatted a bit and he asked if it would be okay to give us some beta on the problem my friend and I were trying to solve. The fact that he asked, rather than simply blurting it out, immediately made me respect him more. He helped us, and even showed us what we needed to do in order to get to the next hold. Then he finished with the exact piece of advice a couple of newbie climbers, and anyone in general, needed to be reminded of…

“It’s not about getting to the top. It’s about flowing from one hold to the next hold. Enjoy the journey fellas.”

My buddy and I agreed and just smiled at each other. 🙂